The author of The Old Man’s Last Sauna has conducted interviews more often than he has been the subject of one. Late last summer, he sat down with Erica Butler of the Centretown Citizens Ottawa Corporation, the long-time non-profit housing organization which built and manages the Beaver Barracks, a development whose genesis Carl covered in the online news magazine True North Perspective. And which he now calls home.

In short order, the profile explores Carl’s long-time love affair with flying, the history (and future!) of one of Ottawa’s important landmarks and, of course, a writer’s life and work. Read More … 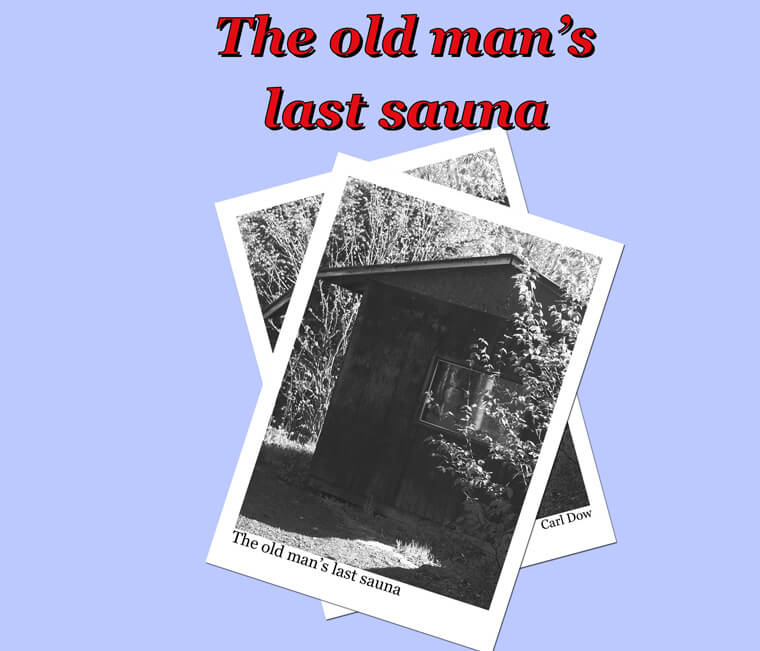 Stories that will move, amuse and even shock
in their subtle explorations of the human spirit

From odes to loves lost and loves found; from a clear-eyed look at what it takes to destroy a strong man to the web of love between a mother and her son; from the greed that drives a man to murder to a father’s understanding of the difference between his son’s imagination and the lies that lurk in the minds of his grandparents, Carl Dow’s stories introduce a powerful voice for the 21st century, one born of the turmoil, violence and struggle for justice and understanding that marked so much of the 20th.

A limited number (under two hundred) copies of The Old Man’s Last Sauna are still available directly from the publisher. Each will be autographed by the author and when they’re gone, they’re gone!

Copies of the second edition can be ordered through your favourite online vendor.
END_OF_DOCUMENT_TOKEN_TO_BE_REPLACED

Good thread on the trouble(s) with #wellnessculture! (And I'm not just saying that because @zillanovikov has a novel forthcoming from The BumblePuppy Press! #reprise)

As someone with mental illness, I would like to offer a giant fuck you to wellness culture. 1/16

Not from the #BumblePuppyPress, but somehow still worth buying (or even getting for free, if you sign up to the #nightbeats #newsletter)!

We're delighted to reveal the cover for The Sad Bastard Cookbook because it means we're one step closer to sharing the book with you!

Seems like a much bigger scandal than the cancellation of a gas plant nobody wanted. That cost money but it wasn't corruption. https://twitter.com/balkissoon/status/1595939190331801600

In Ottawa, developers who gave to the Progressive Conservatives bought long-undevelopable farmland last year. The Ford government just moved the land into the urban boundary. https://www.cbc.ca/news/canada/ottawa/land-owners-developers-ottawa-urban-boundary-expansion-1.6660490

Why Does My Text Look Pasted-On: a tutorial for self-publishing authors on making your fonts integrate harmoniously with your cover design. 🧵