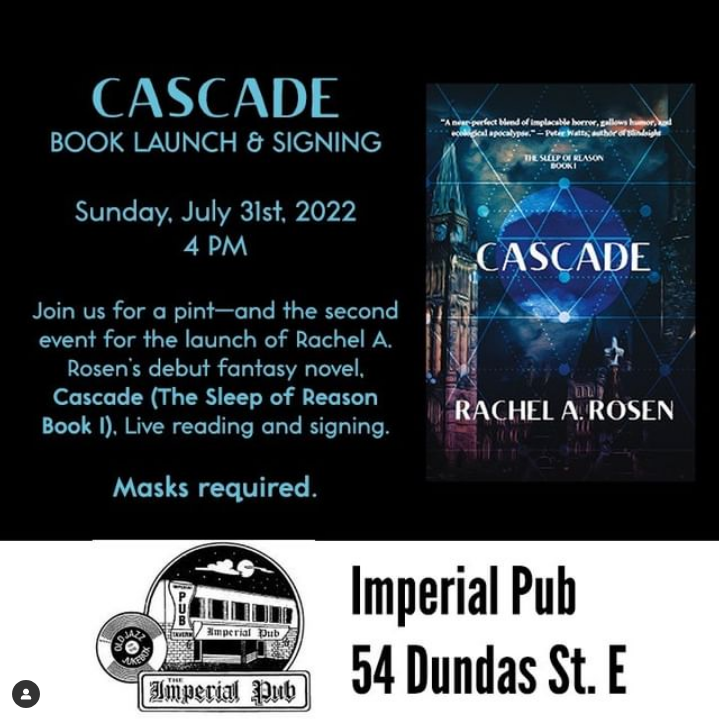 If you’d prefer to have a pint while you leaf through Rachel A. Rosen’s brilliant debut novel, Cascade, Rachel will be holding court at Toronto’s famous Imperial Pub, 54 Dundas Street East, on Sunday, July 31st, from 4 PM until closing (or we run out of books). (Covid is with us still; mask required!)

____
“Rachel A. Rosen is some kind of twisted genius. I wish I had even half her moves.” — Peter Watts, author of Blindsight
____
“Shriekgrass grows in the places magic has touched, where no other life can gain a foothold. Pale and spindly, sharp fronds edge its drooping stems. It sways in the wind like the legs of a centipede or a human spine. It screams when cut, groans where it pushes through the dry earth and the cracks in the pavement.
“A boy in school had once told Sujay that all plants feel pain, and the smell of freshly cut grass is actually chemical terror at the lawnmower blade. Plants, she understood—but didn’t quite believe—were constantly communicating, but at a register humans couldn’t perceive. Only the sentience of shriekgrass could be proven, a thin cicada death-rattle heard across the Prairies; only shriekgrass, it seemed, felt horror and pain not only in leaving the world but in entering it.”
_____